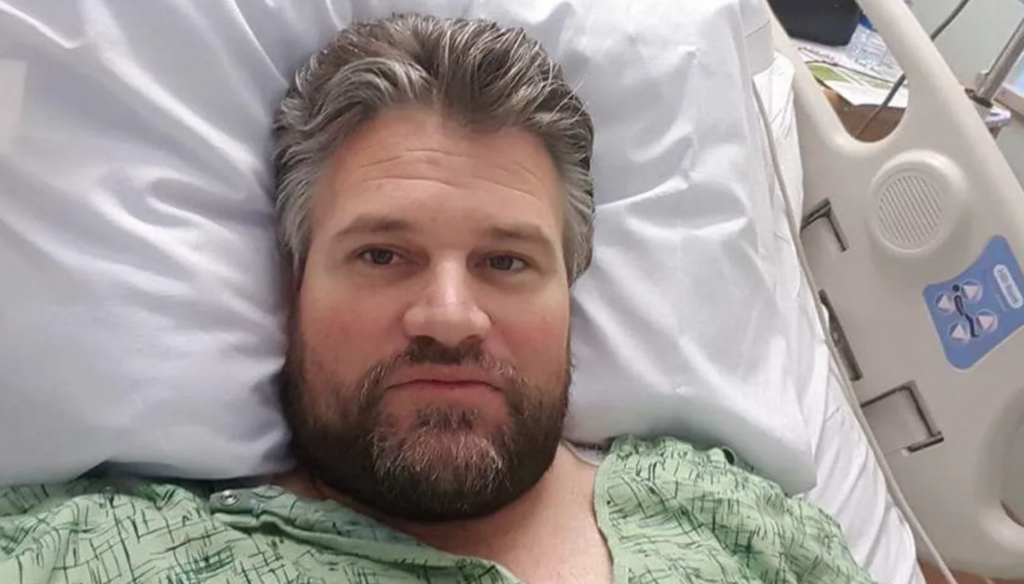 After the VA missed a spine-eating infection, a loophole kept him from suing. A new bill would change that for other vets

It’s been three years since doctors misdiagnosed an infection that was devouring the spine of Marine Corps veteran Brian Tally.

It’s been two years since his hopes for damages from the Department of Veterans Affairs were dashed when he was informed that the doctor who made the mistake was a contractor — and the statute of limitations for legal action against the care provider had passed just weeks before he got the news.

And it’s been a little under a year since he drafted the first “Tally Bill,” a piece of legislation that he and a handful of vets and advocates stitched together — before that first bill died quietly in Congress in Sept. 2018.

Now, Tally might finally have a chance for closure.

This month, Rep. Mark Meadows (R-N.C.) is planning to introduce the Brian Tally VA Medical Care and Liability Improvement Act, a spokesman for his office confirmed to Task & Purpose. The bill is aimed at fixing how the Department of Veterans Affairs handles instances of medical malpractice, particularly when the care provider is a contractor.

Task & Purpose obtained a draft copy of the new “Tally Bill”, so named for the 42-year-old vet who was left without legal recourse to sue for medical malpractice that occurred at the VA.

As it stands, the draft version of the new legislation aims to make the following changes to the Federal Tort Claims Act, the law which governs how citizens can sue the government for negligence or wrongdoing:

‘I was being eaten alive for just over four months’

The bill is designed to protect other veterans from the same situation Tally found himself in three years ago.

In Jan. 2016, Tally was suffering daily from chronic pain in his back. He’d awaken every night to sweat-soaked sheets, and move to the bathroom where he’d lay down on the cold floor, hoping for relief that wouldn’t come. The former Marine sergeant, who left active duty in 1999, couldn’t walk, so he would low crawl if he needed to get around his house.

Multiple trips to the emergency room brought no end to the pain, and even fewer answers — just a diagnosis that he had a sprain in his lower back and a prescription for what he described as a “cocktail” of pain pills.

Suspecting the diagnosis from the Veterans Affairs hospital in Loma Linda, California, was incorrect, Tally and his wife, Jenny, paid out of pocket for an MRI in March. The scan showed structural damage to his spine, yet when Tally took the MRI back to the VA, he was told he’d have to wait until December for surgery.

Instead, Tally used Veterans Choice — a VA program which allows veteran patients to see private sector doctors — to go to Scripps Mercy Hospital in San Diego. There a surgeon discovered the cause of his pain: A bone-eating staph infection was attacking his spine.

The damage was so severe that it looked “moth eaten,” Tally told Task & Purpose. “I was being eaten alive for just over four months.”

The infection could have been detected far earlier had Tally’s VA doctors ordered a blood test and an MRI, he and his lawyer, Natalie Khawam, with Whistleblower Law Firm, told Task & Purpose.

In March 2017, Tally filed a claim for malpractice under the Federal Tort Claims Act, under which he had a two year window from the date of the incident before his statute of limitations passed.

The infection left Tally physically debilitated. Unable to work, he struggled to make ends meet — he was counting on a hefty payment for what appeared to be an open and shut case of medical malpractice. Tally said that he corresponded with the VA about his case for months and assumed everything was moving forward smoothly.

Then, in Nov. 2017, the other shoe dropped: Tally received a letter from the VA saying the department was not responsible because the clinician who made the mistake was not a Veterans Affairs employee, but a contractor. Because the care provider was not a VA employee, Tally could not pursue his malpractice case in federal court. This meant that his only chance was in state court. But by the time he was informed of the doctor’s employment status, it was too late: The one-year statute of limitations for California, where he lived, had passed.

“That was hard to swallow,” Tally told Task & Purpose. “We’d been fed so much false hope. I’ve got a family. I’ve got four kids and a wife and a house, and we had already lost so much trying to stay afloat, and then to hear that there would be no accountability, no course of legal action, I mean, our hearts just sank. We went into complete survival mode. We’re like, ‘How are we even going to survive this?'”

The damage to his spine is irreparable, Tally told Task & Purpose.

These days, he has trouble walking and using the restroom. He spends most of his time sitting — one of the few ways he can take the pressure off of his back — but the pain still comes in the form of sporadic shocks and spasms that feel like “ice picks going up and down your spine” he told Task & Purpose.

‘When you are hurt due to no fault of your own, there needs to be accountability’

The Brian Tally VA Medical Care and Liability Improvement Act could offer a solution to cases similar to Tally’s by forcing the VA to explicitly identify whether medical malpractice occurred at the hands of a VA doctor, or a health care contractor.

“This is going to give legal recourse to all the veterans that not only got injured by malpractice but were also injured by the VA system and their failure to make our veterans aware of the legal nuances that no one would know unless they were actually told about this,” Natalie Khawam, Tally’s attorney, told Task & Purpose.

Susan Carter, a spokeswoman for the VA, told Task & Purpose that the department “has not yet taken a position on the bill.”

“VA always strives to provide Veterans with the very best health care available. When we don’t meet that standard, we hold ourselves accountable,” Carter said. “In this case, we worked with the veteran and his attorney in an effort to avoid litigation, and settled this unfortunate case in a way we hope is meaningful to Mr. Tally.”

The department did not elaborate on how Tally’s case was “settled,” but Khawam provided Task & Purpose a copy of an email Tally sent to the VA’s Office of General Counsel in Nov. 2018. According to the email, in May 2018, Tally was offered a $50,000 payout — far below the $2,175,000 he initially sought for damages in federal court. Under financial duress and about to lose his home, Tally negotiated with the VA through an attorney, and received $150,000. After legal expenses, he was left with roughly $125,000.

Separate from the bill, Tally said he intends to pursue legal action against the VA, alleging that the department deliberately waited until the state’s statute of limitations ran out before informing him of his doctor’s employment status, at which time they “strong armed” him into taking the payment, Tally said in the email.

Since his ordeal, Tally has made it his mission to change how the VA handles malpractice in cases like his. In June 2018, he formed his own ad hoc legislative team — made up of friends, fellow veterans, and a couple amateur legislative experts, including a high school government teacher — and drafted the Brian Tally VA Medical Care and Liability Improvement Act, or the “Tally Bill.”

In Sept. 2018, he took the “Tally Bill” to Washington where he met with lawmakers and veterans advocates, the military and veterans radio station Connecting Vets reported that summer. By the next month, the first “Tally Bill” was introduced, but it died with little fanfare in that session of Congress. Nearly a year later, Tally has a second chance with a slightly modified version of the Brian Tally VA Medical Care and Liability Improvement Act, expected to be introduced by Meadows’ later this month.

“Veterans’ care has been a top, long-time priority of [Mark Meadows] — part of that mission is a more accountable VA and improving access and resources for vets as they deal with navigating the VA system,” Ben Williamson, a spokesman for Meadows, told Task & Purpose.

Currently, veteran patients aren’t always aware whether they’re receiving care from a federal employee. After all, one person in a lab coat looks as official as the next, especially when they’re providing treatment at a government hospital. But that small distinction in employment status can have major implications when it comes to lawsuits.

“When you go into a VA hospital, you don’t always know who’s a contractor and who’s a VA employee — that’s not revealed to you, even when a wrong is committed,” Sherman Gillums, the chief advocacy officer for AMVETS, told Task & Purpose. “It’s in the federal government’s interest not to reveal that fact until the statute of limitations has run. In Brian’s case, they admitted the wrong only after the one year had run out for the time they would have had to sue the contractor.”

Though it’s too little, too late for Tally’s namesake legislation to help his case, there’s still a chance it could help others.

“When you are hurt due to no fault of your own, there needs to be accountability,” Tally said.

And that’s what keeps him going.

It helps him through the daily physical pain, and pushes him past the mounting fatigue as he takes on “the biggest bureaucracy in the country,” but it’s “been tough,” he added.

“I’m hoping that this bill passes soon so I can move on with my life. This is something I promised myself that I would see through, and it’s something that would give me some much-needed closure, knowing that this will never happen to another family again.”