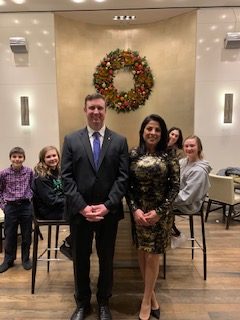 WASHINGTON, D.C. – President Trump signed the National Defense Authorization Act into law Friday evening. It was a huge victory for a terminally ill North Carolina soldier, who has been fighting for his right to sue the government for medical malpractice.

After more than a year of lobbying and fighting for justice, Sfc. Richard Stayskal’s bill was put into the NDAA. Now that it’s gotten the president’s signature, it’s officially law.

North Carolina Purple Heart Green Beret first shared his story with FOX 46 back in 2018, telling us how doctors at Womack Army Medical Center misdiagnosed his lung cancer as pneumonia in 2017, delaying treatment that could have prolonged his life – his story is getting results and now changing federal law.

Stayskal began fighting for the right to sue the government for their mistake, action previously unavailable to active-duty soldiers under a nearly 70-year-old law called the Feres Doctrine.

‘WE DID THE IMPOSSIBLE:’ SENATE PASSES MILITARY MEDICAL MALPRACTICE LAW

“It’s a huge relief to know there’s better accountability,” Stayskal said after the NDAA passed the Senate. “That service members are getting what they deserve. I’m hoping everybody’s going to share the joy us right now and the happiness that’s deserved for all the ones that feel left behind or forgotten about over the years.”

Stayskal praised the bipartisan support for his fight. He and Khawam credit a yearlong series of FOX 46 investigations for getting results.

The entire Stayskal family and their supporters are overjoyed by the passage of the law.

“We are so humbled to experience history being made before our eyes,” said attorney Natalie Khawam. “And our Bill, that no one ever thought would happen, became a law today!”

“We had a mission,” she added. “And today we accomplished it!”