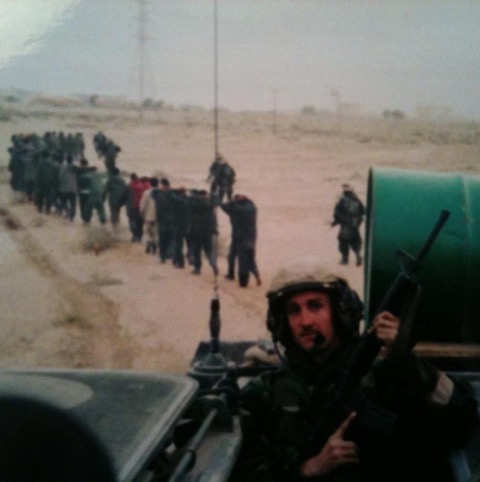 St. Pete Marine wounded in Iraq claims Corps turned back on him

ST. PETERSBURG, Fla. (WFLA) — The Veterans Administration says Peter Nolan of St. Petersburg, a 17-year Marine, is 100 percent disabled from his injuries suffered during Iraqi Freedom and is unable to serve.

The Department of Defense has a much different take.  It determined he is absolutely fit for duty.

Because Peter Nolan was in the Marine Reserves when he was called up to fight in Iraq, his lawyer says a different set of rules applies to him.

As a gunnery Sgt. driving a 26-ton amphibious assault vehicle, Peter Nolan fought his way from Kuwait to Baghdad in 2003.

“There’s definitely, a lot of fear not knowing whether or not you are going to make it home to see your family,” Peter said.

A member of the reserves on active duty orders, he witnessed the brutality of war. During the final push to Baghdad, a massive explosion knocked him unconscious.

Sgt. Nolan suffered nausea, vomiting and headaches for days. He came home later that year a different person, but brought the same medical issues and more.

“I was having severe headaches, mood swings,” he said.

For a decade he tried to work through these issues.

In 2015, the V.A. determined Sgt. Nolan suffered a traumatic brain injury and post-traumatic stress disorder, as well as back, neck, shoulder, knee and ear injuries.  It declared him 100 percent disabled.

However, a Department of Defense Physical Evaluation Board claimed he was only 10 percent disabled.

“They did not look at the evidence that was in the record,” Peter’s attorney Natalie Khawam said.

Sgt. Nolan appealed the board’s decision, and it later decided he is fit to serve. But is he fit?

“He’s broken. That is not somebody that I want on the front lines trying not just to protect himself, but others,” Ms. Khawam said.

“They discarded him,” his wife Stephanie said.

He lost his income, insurance benefits, everything.

“I hurt for him,” Ms. Nolan said.”I know he has suicidal tendencies.”

Sgt. Nolan contends he was a good Marine and served his country faithfully. His country, he believes, should return the favor. Instead, he contends he is pretty much being forced out without retirement or benefits that he believes he deserves.

Since the Marine Corps determined he was fit for duty, that cancels Sgt. Nolan’s VA claims. He has filed an appeal with the Board for Correction of Naval Records.

23 veterans commit suicide every day.  Abandonment only compounds the physical and emotional wounds Sgt. Nolan suffered. He and his attorney fear this problem for reservists is much bigger than they know.