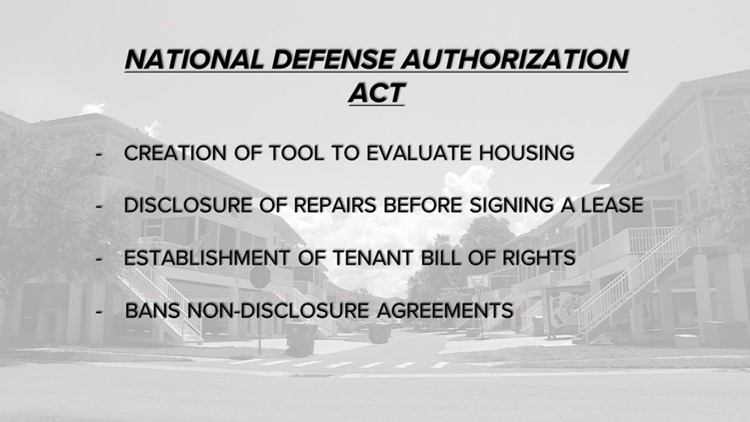 TAMPA, Fla. — The National Defense Authorization Act or NDAA released the most “substantial overhaul” of the Privatized Military Housing Initiative since it was created in 1996.

Among the proposed changes, the final report requires the creation of a standardized tool to evaluate military housing for lead and mold. It requires disclosure of major repairs or remediation before a military family signs a lease.

The report also requires the establishment of a Tenant Bill of Rights that sets minimum acceptable living standards and bans the use of non-disclosure agreements when a family decides to move out of military housing.

This is a compromise from leaders in both the House and Senate. The house and senate will have to vote on the report before it goes to President Donald Trump’s desk.

One of the attorneys representing families suing because of mold in privatized military housing on MacDill Air Force Base told 10Investigates that families are excited their concerns are being heard.

“They are thrilled! We changed history,” said Natalie Khawam, referencing the provisions for privatized military housing and the 70-year-old law that barred our active duty from having any recourse or compensation if they were victims from medical malpractice at a DoD facility.

“We have finally given a voice to so many military families,” Khawam said.

RELATED: ‘It is cheating our military families and our taxpayers’

Lawmakers are also weighing in on the legislation.

“This year’s NDAA is a great win for our military and gives our men and women in uniform the resources they need to protect our nation,” Sen. Rick Scott wrote in a statement. “I’m proud we included nearly $750 billion to fund our military this year, including more than $1.5 billion in funding to rebuild Tyndall Air Force Base and a pay raise for military members, which are key components of my Fighting for Florida budget agenda.”

“I’m also glad my amendments to hold China accountable and prohibit the DOD from doing business with anyone that supports the oppressive Maduro regime were included in the final version,” Sen. Scott continued. “We must always fight to make sure our military has every resource it needs to protect our nation, support our allies and stand up for freedom across the globe – and I look forward to the swift passage of this year’s NDAA.”

Sen. Marco Rubio said the brave men and women serving in the U.S. armed forces are the focus of any NDAA.

“Not only does this NDAA ensure our armed forces have access to critical resources needed for troop preparedness, it also grants our service men and women their largest pay raise in a decade,” Sen. Rubio said. “I am encouraged to see that Florida is a priority, with funding for military construction projections across the state, including the recovery of Tyndall Air Force Base and authorizes numerous programs which are operated, produced in or supported in some form in Florida.

“I am also pleased to see the passage of the Intelligence Authorization Act, which includes provisions to strengthen our Intelligence Community, safeguard our elections, and better position our country to defend against Chinese, Russian, and other foreign threats.”

This article was originally posted on ABC 10 News and can be read here: https://www.wtsp.com/article/news/investigations/10-investigates/military-mold-national-defense-authorization-act/67-9c4a41fa-2c7f-46ec-b428-b27a3d40fad2
Previous post MacDill families file federal lawsuit over mold problems at base housing Next post AP Exclusive: Drugs Vanish At Some VA Hospitals